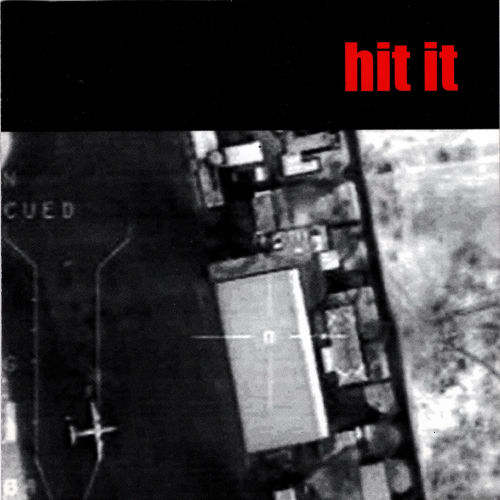 This is a digital reissue of the 2001 CD release "Hit It', the one and only album by Demolition Squad, which became something of an underground legend during its short life. The record received a 9 of 10 rating from Alternative Press, matching the rating of Radiohead's "Kid A" in that same issue. The reviewer described Hit It as "compelling, highly original material".

This project began when Jim Goetsch, who has been producing electronic music under the name Subversive Element, happened to run into a recent arrival from Japan, Kim Koschka. Goetsch mentioned to Koschka that he was trying to do music that had avant garde orchestra over massive beats and bass, which brought a laugh from Koschka, saying "Yeah, that's what I'm trying to do too!".

So the work began with Goetsch laying down the basic tracks. Mick Harris' Scorn was definitely the role model here, with Goetsch trying to conjure up the biggest beats he could with the Roland MC-303 and biggest bass he could with the Korg Prophecy. After adding sound layers with various other synths as well as samples pulled off a wide variety of sources, he then turned the tracks over to Koschka for the orchestra parts.

Koschka's incredible talents at virtual orchestra are what really distinguishes the record. Most people who hear this have no idea that it's not a real orchestra. But beyond that, Koschka's compositional skills are really what takes this work to the level it achieved. This composer's studio was full of well-studied scores of the major 20th century composers, and it all shows on this record.

A young English DJ residing in L.A. at the time, Luke Collins, was brought in for two tracks, "Doin' It Again" and "Hit It", to add his unique turntable skills, dropping in effects-processed sound layers rather than beats.

Since this music was meant to be played LOUD, top Los Angeles engineer Bob Kearney was hired to do the mixing, and the final mastering was done at one of L.A.'s top mastering houses. So the louder it's played, the better it sounds. The final result of all this is an experience unlike anything else you have ever heard.

Reviews
Alternative Press / July 2001
rating: 9 out of 10
Demolition Squad combine lurching, Scorn-esque beats with eclectic modern-classical nuances (lots of strings teased into contorted sonic origami, along with scattered, minimalist piano), binding the lot with itchy electronics and uneasy samples. On "Looking for Number One", the Squad weave loping percussion into a forest of unrest, as tension strings arch like smudged rainbows and hesitantly plunked piano notes skip about. Dawdling drums ignite a flurry of jagged violin textures (stroked by shards of glass) during "Get On Down" before a siren's wail and a low-flying aircraft emit muffled, grimy belches of noise. Hit It abounds with compelling, highly original material.
JC Smith

Earpollution / July 2001
Succinctly categorized as "avant-garde orchestra over massive beats and bass," Demolition Squad's Hit It thunders by like a squadron of Flying Fortresses, carpet bombing you with timpani, tubas, brass sections, and string quartets while shaking the foundations of your house with the sonic upheaval of the monstrous engines. In the world of make-believe where everything happens like it should, Ridley Scott would be asking Vangelis and Scorn to provide the soundtrack for Black Hawk Down and this is what it would sound like. In "Doin' It Again" a massive, pounding low end shudders beneath a radio report from the war zone while strings caper and shriek like echoes from Guernica. "Change of Strategy" is a whirlwind of source material sprayed over the top of a steady rock beat--an errant woodwind yanked out of Disney's Fantasia and forced to perform for pocket change, the Kronos Quartet doing a recreation of the fire-bombing of Dresden, turntable trickery, radio signals and voices processed into a thick soup--it's a testament to Kim Koschka and Jim Goetsch's skills at reconstruction that the whole structure doesn't collapse beneath them.

But then it isn't just a matter of happy luck by which Koschka and Goetsch achieve their sonic creations. Growing up with and claiming as influence such artists as Miles Davis (during his electric years), Weather Report, Karlheinz Stockhausen, Pierre Boulez, and Bill Laswell, the duo have scooped off the most rhythmic and eclectic aspects of each and blendered them into their own creative outlook on music. "Get On Down" begins with their amalgamation of strings, beats, and intercepted radio transmissions and grows heavier and more massive, expanding into a firestorm of sound as air raid sirens and distant artillery fire mete out a dervish-style syncopation that can only herald the conflagration left in the wake of a napalm attack.

A highly polished dark soundtrack, Demolition Squad's Hit It delivers a solid strike to the solar plexus, a forceful punch that you will feel down through your bones and up through the nerve endings in your brain. Highly recommended.
Mark Teppo