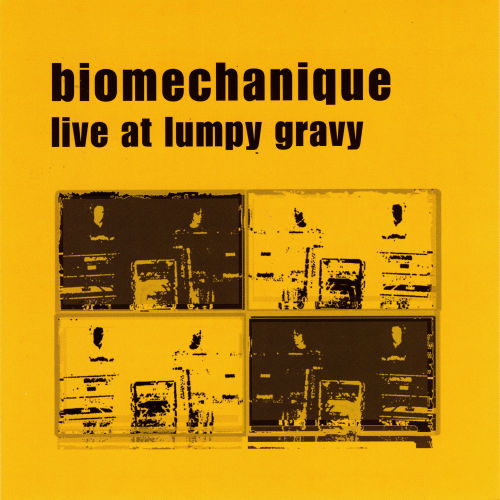 A continuous live performance from a synthesist and a DJ

This record is a two track recording of a 1998 live performance, with Jim Goetsch manning synthesizers, sequencers and drum machines while Luke Collins attacks his own synthesizer & sampler plus a turntable that is used not for beats, but for layers of processed spoken word and sound effects that ride atop the tightly knit grooves the two have written together (no drum loops were used). The result is a dense sound collage of dub, drum & bass, dialog, soundscapes and bits of melody with no single part as the focus, a constantly evolving biomechanical brew.

In 1997 in Los Angeles, there began a marvelous art gallery / restaurant / performance space by the unusual name of Lumpy Gravy. The name came from title of one of Frank Zappa's earliest records, as the place was dedicated to his memory by its owner Gabor Csupo. Although Csupo is quite a musician and has several releases on his own Tone Casualties label, most people are familiar with animated productions from his partnership, Klasky Csupo, most notably "Rugrats", The Wild Thornberries", and "Real Monsters".

Unfortunately Lumpy Gravy was not to have a long life, probably due to the conflict of the burgeoning success of the animation studio and the time such a performance space demands. Hopefully this recording will serve as a memento of this fabulous place. Biomechanique also wishes to thank to Vince Kosa (known for his work in BP Service) for his help in all the recordings made there, including this one.

Reviews
Sonic Curiosity: "The fusion of driving percussion and atmospheric timbre are masterfully crafted to achieve a trance that is vivacious with brisk animation."

Earpollution: "Collins' and Goetsch's live experiment as Biomechanique is a great example of how electronic music lends itself to a spontaneous generation. Good show, guys."

Aural Innovations: "A special CD by a special duo. I hope that they produce some more music like this."